This is the second and last part of my AWS re:Invent recap. Go check out the first part if you haven’t done so already.

In this second post, I will outline the products announced by Werner Wogels during his keynote. You will also find a small opinionated analysis of the impact of each product, based on the current market and ecosystem.

I tagged the really important ones with a [Game Changer] in the title.

This year, AWS really pushed its advantage in the serverless market where they are leading even more clearly than in other fields.

According to AWS, this was a feature highly requested by customers. So now, AWS Lambda supports 4 languages: Javascript, Python, Java and C#.

I would have preferred an “agnostic” Lambda runtime where you could have run any binary (or container), but another language is always good to take.

You can now run Lambda functions (in Javascript) at AWS’s edge locations, in response to Cloudfront events. You can manipulate the request and the response directly at the edge location, avoiding the round-trip to the origin, for a better latency.

This is a very interesting next-step for Cloudfront. This kind of feature is almost certainly the future of CDNs.

Step Functions clearly was the product that AWS was pushing the most, because it takes the serverless paradigm a step further.

AWS Step Functions allows to connect Lambda functions with each other to implement a real, complex application. You can implement classic paradigms such as loops, retries, etc. You can also poll for long-running jobs. 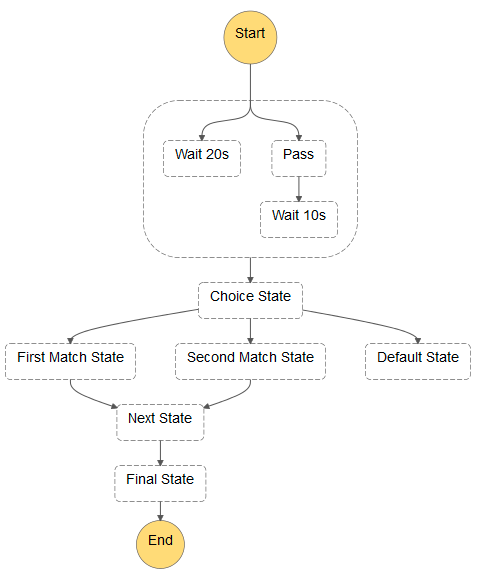 No one else has a product that does this, and it certainly is an answer to the biggest problem of serverless: it’s really hard to implement complex applications. Now you can easily link functions while keeping them independent, and scalable.

If AWS is the leader in the serverless world, it clearly missed the container battle. ECS is light years behind other solutions such as Kubernetes or Mesos/Marathon. So much so that, before re:Invent, there was chatter about a possible Kubernetes-as-a-Service (or at least etcd-as-a-Service), announcement that would come in direct competition with Google’s GKE.

AWS being AWS, they did not choose this route and unexpectedly released an open-source project: Blox.

Blox is a framework for container management and orchestration on ECS (which is, of course, not open-source). In other words, it gives you the ability to create your own tools on top of ECS. Right now, two exist and have been released directly by AWS:

This is accompanied by a few changes on ECS such as the ability to label your nodes and allocate workloads according to those labels.

While Blox is in theory a good idea, it is probably too complicated for most people to implement those kind of tools. Right now, it only has a really small subset of the features that the competitors have and I don’t see this project gaining enough traction to ever catch up. It feels like AWS is throwing all of its power in the serverless battle while doing the bare minimum on the container front.

As a side note, it is interesting to note the open-source nature of Blox. AWS is known for having a very ambivalent attitude towards open-source: on one side, they clearly use it a lot and cater to the open-source community, but on the other side, they almost never release their own tools and it is notoriously difficult for Amazon employees to contribute to open-source projects. It would be nice if Blox was the beginning of Amazon’s policy change, but I honestly doubt it.

AWS Shield is an integrated anti-DDoS product. When it was announced, many people, myself included, said “Huh?! Doesn’t AWS do that already?”. Here is the catch: there are 2 service levels to Shield: Standard and Advanced.

It is my supposition that AWS already had an anti-DDoS service but never advertised it. Naming it publicly “Shield Standard” allowed them to commercialize the “Advanced” version.

The cost of the Advanced tier is quite high, so the potential users are probably already big AWS customers (or companies with large budgets) and websites that “naturally” attract those kinds of attacks.

AWS OpsWorks For Chef Automate is probably the worst name ever for a product, so I will call it AWS OFCA in this article. It comes along the old AWS OpsWorks that has been renamed AWS OpsWorks Stacks.

AWS OFCA is a managed Chef-Server. Chef-Server allows you to store cookbooks and configuration for your nodes. The Chef client then runs on the nodes and connect to the Chef-Server to get their configuration and the needed cookbooks. You can use Chef outside AWS, but OpsWorks allows to integrate with other AWS services such as autoscaling.

I am a big Chef user, so AWS OFCA is of great interest to me, but I haven’t had the time to test this product yet. If you are already using Chef, it probably is a good solution. If you are not, you probably want to compare Chef to other projects such as Puppet, Ansible, Salt-Stack (or even Docker) before making a choice.

EC2 Systems Manager encompasses the EC2 Run Command API and adds other features that allows you to manage your EC2 and on-premise fleet.

I am ambivalent towards this product: on one side it provides some features that the AWS ecosystem clearly lacked, but on the other side most, if not all of them, have already been successfully implemented by other open-source tools.

I feel like migrating from other tools such as Packer or Ansible to those requires a lot of work and I am not sure if it’s worth it.

On this dashboard, you can see all the AWS events that are related to the services you are using. If there is a maintenance planned on a host one of your nodes is running on, you will see it here. If there was a problem on your RDS instance, it will be displayed with some contextual help. You can also automate the response to some events via CloudWatch Events.

AWS was missing a few pieces in this field. The introduction of those 2 new products is filling those gaps and clearly indicates that AWS wants to have a product available for your every need.

AWS CodeBuild comes to the already crowded market of the CI tools. As such, it is a direct competitor of Jenkins, Travis CI or Gitlab CI. It allows you to run a continuous integration/deployment (CI/CD) pipeline in a managed environment.

You configure your source code location and what you want to do in your build (via a Yaml file) and CodeBuild takes care of the rest. It can build projects for Android, Java, Python, Ruby, Go, Node.js or Docker.

CodeBuild is interesting but there is a very strong competition in this field and I am not sure the features are good enough to make a real difference.

AWS X-Ray is an Application Performance Management (APM) tool. It comes on the territory of tools like NewRelic or AppDynamics. It can capture data directly from your application and a number of AWS services such as ELBs. It gives you a nice global view of the health of your application, infrastructure included.

However, X-Ray is compatible with a small number of languages: NodeJS, Java, C#, .NET and for Lambda. Moreover, to get anything meaningful from inside your application, you need to instrument it yourself. For instance, for NodeJS, you have 3 different pieces of code to include to monitor incoming requests, AWS API calls and outgoing HTTP calls. You can also send custom traces via another API call.

It feels like the competitors are much easier to use and have a wider range of supported technologies.

Those are products that I could not put in any of the other categories, but it doesn’t mean they are not important!

Pinpoint is a service for managing notifications on a mobile app. You can send notifications to specific groups of users, based on a variety of parameters. It also gives you analytics and reporting on the effect of your notifications.

Glue is a managed ETL (Extract, Transform, Load) tool. You define data sources and targets (S3, RDS, Redshift or others), specify transformations to be applied to this data (Glue will generate some working Python code that you can modify) and finally you create and schedule jobs.

Glue has the potential to be a very interesting service, but there are not enough details at the moment to give a more definitive opinion.

AWS Batch is a service that makes batch computing easier. With Batch, you can run jobs on both managed and unmanaged infrastructures, but most of the advantages come from using managed infrastructures. It allows you to define broad requirements for a job (like “this job is memory or CPU-bound”) and it will provision the right instances for you. Another very good feature is the integration of Spot Instances where you can say “Run those jobs only if the spot price falls below 20% of the on-demand price”.

There are a lot of concepts in Batch, so instead of explaining everything, I will redirect you to this video from the AWS team that I feel is a very good visual representation of the service:

I really like this service and think it can greatly ease the management of a number of workloads.